The ESCAN kick-off meeting (10-12 December 2009, Amsterdam) was the first public manifestation of the society. 70 participants from all over Europe attended 20 scientific presentations.

We look back at a succesful and well-attended first scientific meeting from 9 to 12 May 2012 in Marseille.

The Board is pleased to announce that Michael Falkenstein, one of our founding members, and his team will be organizing the ESCAN2014 meeting.

We are pleased to announce the 3rd international conference of the European Society for Cognitive and Affective Neuroscience, that will take place in Porto, Portugal, between 23-26 of June, 2016, at the Porto Palácio Congress Hotel & Spa.

At the conference he presented a talk on "Neurocomputational basis of social signals in the anterior cingulate cortex".

Please welcome our new board members

New functions in the board

The 2018 international conference of ESCAN was the largest yet and a great success! If you feel nostalgic, you can revisit many of the conference highlights on Twitter: #ESCAN2018. 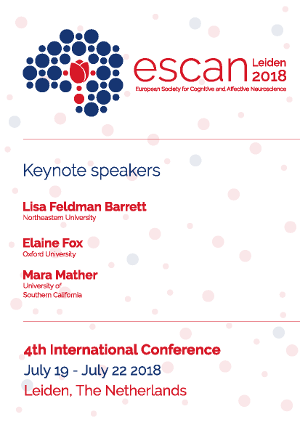 Call for nominations: Election for ESCAN board members 2018

The ESCAN board is preparing an election to select new board members, that is scheduled to take place later in 2018 via electronic ballot (more information on the election will be provided at a later date).

As such, we are announcing a call for nominations among the ESCAN membership for the upcoming election. ESCAN members in good standing that are committed to the duties and mission of the society are eligible to become candidates either by self-nomination or by suggestion.

Members will be contacted via the e-mail address with which they are registered in the society with further instructions to submit a nomination/suggestion.

We are happy to announce the four candidates that have come forth in their interest to join the ESCAN board (ordered alphabetically):

There are up to four available positions in the board. Read the candidates' application statements and biosketches.

The dates for the election are between the 7th and 18th of January 2019. An official notification from BallotBin has been sent via e-mail to voting members (as per Article 13, point 2 of the Constitution: "Every full member, retired member or honorary member who is not suspended has one vote. All other categories will be considered special members who have not the right to vote.").

Check your e-mail to vote!

For any queries please contact the ESCAN Board Secretary, Fernando Ferreira-Santos (frsantos

The results of the ESCAN election are out, and we are happy to announce the election of the four candidates Agnieszka Wykowska, Giorgia Silani, Matthias J. Wieser, and Suzanne Oosterwijk. Congratulations!

Participation in the ballot by members eligible to vote was 30.4%.