The ESCAN2018 conference will be held at the Leiden University Medical Center (LUMC) in Leiden, the Netherlands.

The LUMC is located right next to Leiden Central Railway Station.

If you arrive at the venue from the center-side of the train station, you can either take the passage at the Joop Walenkamptunnel, on the west-side of the station, or walk through the station. For this last option, however, you need a ticket to check in- and out at the tickets gates. We can provide you with a barcode you can use to pass through the station without having to get a ticket from the machine. Importantly: this barcode does not function as a train ticket. If you want to take the train, you still have to buy a ticket at the yellow ticket machines!

Schiphol Airport, you can take a train to Leiden Central Station, which will take about 15 minutes. A train from Schiphol to Leiden will leave about every 15 minutes. A single ticket will cost you €5,70 and can be bought at the airport upon arrival.

The LUMC is located behind Leiden’s Central Station and is within walking distance.

All regional buses to Leiden stop at the Central Station in Leiden.

For up-to-date information on public transport you can phone the Public Transport travel info line 0900-9292 (in Dutch, 75 cents per minute) or look on the internet.

Coming from Rotterdam (A13, A4): Take the A13 and then the A4 towards Amsterdam; exit at junction 6a (Zoeterwoude-Rijndijk, Leiden-Oost) and turn left. At the end of the road, turn right and follow the signposting ('H-Ziekenhuizen').

Coming from The Hague (N44, A44): From The Hague, take the N44 (which turns into the A44) and exit it at junction 8 (Leiden, Noordwijk, Katwijk); turn right and follow the signposting ('H-Ziekenhuizen').

Coming from Amsterdam (A4, A44): Take the A4 and then the A44 in the direction of Leiden-West. Exit the A44 at junction 8 (Leiden, Noordwijk, Katwijk, N206), turn left and go under the viaduct. Follow the signposting ('H-Ziekenhuizen'). 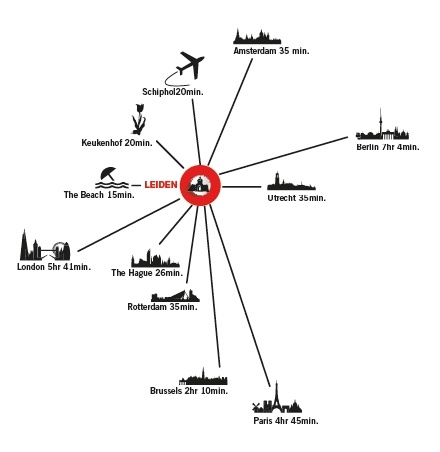 The Netherlands is a relatively small country located in North-West Europe. It is a constitutional monarchy with an estimated population of 17 million. By train, Leiden is only 10 minutes away from the Hague, 35 minutes from Amsterdam, and 35 minutes from Utrecht. The Netherlands has a unique progressive and liberal culture and is known for its windmills, dikes, polders, tulips, bicycles, cheese and wooden clogs. Remarkable about the Netherlands is its flat landscape; 50% of the surface area is less than on meter above sea level and a complex system of polders and dikes prevent it from constant threat of flooding.

Everything that makes the Netherlands so famous can be found in the Leiden region. The flower fields, sandy beaches and dunes stretching as far as the eye can see, picturesque village centres and cheese farms, the Keukenhof, windmills, sailing and traversing the Kagerplassen lakes and the city of Leiden with its historical city centre and many museums.

Hence, the the city of Leiden, the inventive Leiden University Medical Center (LUMC), and the oldest university of the Netherlands (founded in 1575) are the perfect combination for a conference. Many Nobel Prize winners were scientists in Leiden such as Van der Waals and Einthoven. Furthermore, Leiden is a typical Dutch city with a rich history and a picturesque city centre.

Leiden has some wonderful museums, which are absolutely worth visiting:

TIP! Rent a bike (between 9-25€ per day) during your stay and travel like the Dutch do! Especially for travelling within Leiden, this will be faster than public transportation.